"The world has been torn apart: split into two unequal parts by an unstoppable outburst of violence more brutal, far-reaching, and extreme than any previous conflict. Governments have fallen, communities have been destroyed, and families devastated. Everyone has been forced to take a side. Your past counts for nothing now -- the only choice you have left is how hard you fight.

"The terrified Unchanged masses cower in fear, holed up in vast, barely functioning refugee camps in major city centers. The war continues to rage all around them, with neither the military nor the Haters prepared to stop fighting until their enemy has been destroyed.

"Danny McCoyne isn't interested in the war. His only concern is finding his five-year old daughter, Ellis. McCoyne, however, hasn't realized the true importance of children in the new world order. Uninhibited by memories of how things used to be, children are strong, fast, and unstoppable. They are the true Haters.

"Every step McCoyne takes drags both him and Ellis deeper and deeper into this cruel and bloody war, a war that won't end until one side has completely eradicated the other."

Savage, unputdownable, refreshing and often disturbing take on the clichéd zombie genre. Like Hater before it, the raw force, nuanced writing and surprising characters of Dog Blood makes it a landmark work, and an exceptional follow-up to its prequel.

(pb; 1989: second book in James Silke’s Frank Frazetta’s Death Dealer quadrilogy) From the back cover “In the mists of time, before... 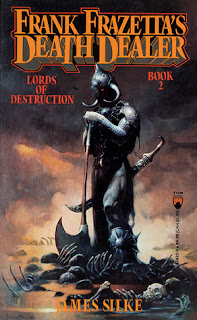