Them Or Us, by David Moody 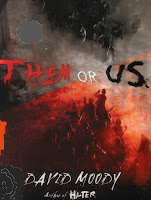 "The war that has torn the human race apart is finally nearing its end. With most towns and cities now uninhabitable, and with the country in the grip of a savage nuclear winter, both Hater and Unchanged alike struggle to survive.

"Hundreds of Hater fighters have settled on the East Coast in the abandoned remains of a relatively undamaged town under the commandof Hinchcliffe - who'll stop at nothing to eradicate the last few Unchanged and consolidate his position at the top of this new world order. This fledgling society is harsh and unforgiving - your place in the ranks is decided by how long and how hard you're prepared to fight.

"Danny McCoyne is the exception to the rule. His ability to hold the Hate and to use it to hunt out the remaining Unchanged has given him a unique position in Hinchcliffe's army of fighters. As the enemy's numbers reduce, so the pressure on McCoyne increases, until he finds himself at the very center of a pivotal confrontation, the outcome of which will have repercussions on the future of everyone who is alive."

Like the first two Hater books, Hater and Dog Blood, this wrap-up novel is - for the most part - a hard-to-set-down, emotionally trepadatious and ferine read that deftly eschews and reworks zombie-work bromides into something bracing and worthwhile.

My only nit about Them Or Us is that near novel's end Moody has his main character, the melancholic and sick Danny McCoyne, uncharacteristically engage in two Plot Convenient Stupid Moments (aka PCSMs), in order to set up the novel's otherwise edge-of-your-seat finale.

I expect these PCSMs from The Walking Dead (hello, Clichéville!) - that is to say, Moody could have, with a few sentence trims, just as easily set up his homicidal conclusion without McCoyne acting wildly out of character.

That minor nit aside, Them Or Us is still a worthwhile and satisfactory wrap-up to this landmark series, and its end-image, nuanced but honest, is appropiately disturbing.

<em>The Watcher in the Woods</em> by Florence Engel Randall 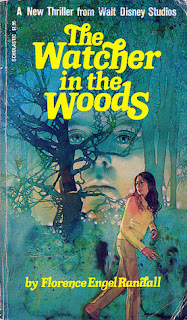